I’m realizing that in my final days here in Israel and Palestine my words now have a certain weight they will lose later. Me, a random guy trying to learn and see in a totally foreign situation, doesn’t really have much of a place in this mess beyond being a caring human being. I know from experience that especially when I get home, people will qualify my perspective of this place based on my “perceived sympathies.” Though I am more hurt and broken now than before I came in many ways, I feel a certain calm and resolve about my answers to their challenge.

The questions I might ask to questions are these: What does a 60 year old refugee camp mean to you? When you walk down the winding streets of a place that really looks quite nice by many standards of the city here, clean streets, pleasant balconies and folks milling through the streets, what difference does it make that signs painted all over the walls still bear the names of the villages these people came from 60 years ago? What do you think about a child who can diligently describe the feel of village life but has never actually been outside the city his parent’s were forced to live in? 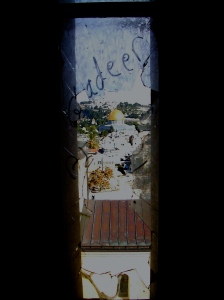 What do you make of a the son of survivors of Auschwitz whose daughter was killed in a suicide bombing in Jerusalem? What if he shares his story to promote peace beside his “brother in grief,” a Palestinian man whose son was killed by a Israeli settler? I certainly didn’t have much to say to them besides thanking them for their courage.

Am I too optimistic to think these people would just like to see peace? The people I have spoken with here are cynical and sad, to be sure. However, the imagination to look past tragic circumstances to keep working for justice is amazingly inspiring. Everyone has assured my that sympathies and sides are clearly part of the “facts on the ground” but a remarkably large number of them seem basically fed up. May we all reach that tipping point where we become so fed up with violence we decide to lower our weapons. Inshallah

This site uses Akismet to reduce spam. Learn how your comment data is processed.