There was once a family that set out to find a home. This was to be a complicated journey, because the adults in this family came from unusual families and knew they wanted unusual things for their home. To make things more complicated, they had children, they came from different cultures, and they got along best in situations similar to where they met: high stakes, life or death kind of situations. While reminiscing wistfully on fixing a flat tire on a dark country road, their jack buried under camping gear and a forest fire raging nearby, they bickered about loading the dishwasher.  One thing that these parents clearly agreed on was that they wanted their home to include more people, a kind of chosen family, to share common memories like the ones they’d built over their years of community experiences.

The family began their journey at a time of great change, where many other people were also interested in exploring different ways of creating homes and finding chosen families. Almost 10 years into the new millennium, the world had forgotten it’s pre-millennial fears of nuclear apocalypse and technological collapse, choosing infinity wars and uninterrupted technological connectivity instead. Doomsday predictions were now less finite and it seemed like many things that couldn’t get worse kept getting so. Many people were burnt out or cast out and many, literally or figuratively, were on the move for something better.

As the family started out, it took them some time to decide where to go. There were two large and beautiful houses, one belonging to each of the parents’ families, that tempted them.  They tried living in both.They also tried living with other people in communities: one with many different families, more private space and more organization and another where they were the only family with very little private space and organization. They didn’t find an existing home that was just what they had in mind, so in the end they decided to move back to one of the large and beautiful houses and start something different. 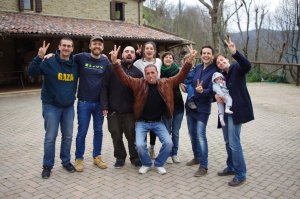 Along the road, the family met a group of people that introduced themselves as the “Doves.”  The Doves were activists,  people who had dedicated some important parts of their lives to building peace in the world. They felt ready now to settle down and make sense of all of what they had experienced.  The Doves were enthusiastic, optimistic, and committed to making the world a better place. They wore T-shirts with clever things written on them and helped the family feel connected to the wider world with all its beauty and suffering.  The first thing the family and the Doves agreed to was to call themselves “the Hoopoes” after a bird they all considered important and symbolic to their journey together.

In the Conference of the Birds, an epic Persian poem, the Hoopoe leads a group of birds on a search for God.  He encourages and unifies and eventually reveals an important key in the search for the nature of God among his bird companions. The Doves were used to creating new names and platforms together, even if they were skeptical about God, and so they happily took on the name Hoopoe and created a digital shared drive (open-sourced, of course) for sharing their collective work. They were not used to compromising on their ideals and were so used to struggling for what they wanted they seemed to forget exactly what it was they were struggling for. Over the years of journeying together with the family it became clear that, as a group, Hoopoe liked the idea of living together and creating a chosen family perhaps more than the reality of the daily commitments, logistics and responsibilities of creating a home all together. After some time, the family and the group formally known as the Doves parted ways, with the Doves renaming themselves The New Hoopoes and creating a new shared drive.

In the Quran, a surah tells of how King Solomon called on all his birds and the Hoopoe did not arrive on time.  Upon arriving late, the Hoopoe brought an important message to the King who was skeptical of his excuse for being late and also his message.  It was almost 20 years after the new millennium now, and by this time it seemed as if all hope of finding common cause had disappeared.  Noone seemed to trust any message or messenger anymore, and so while messages of certain doom seemed to buzz everywhere, no one could agree on exactly and certainly how this doom would take place. Solomon eventually sent the Hoopoe back out with a new message to test his integrity. The New Hoopoes set out on their own as well.

Some time later and after growing further, the family met a new group who introduced themselves as Mehter, a name meaning “Mother” in a now-lost Indo-European language.  Similar to relearning a Indo-European language, Mehter wanted to go back to the roots of our current ways of life, getting to the real “nut” of the meaning of life (while speaking in a way they were convinced was original yet timeless). Mehter sometimes got lost in the details of their explorations and the affirmations they received from their devoted followers. They were committed to making their unconscious processes conscious to reawakening a sense of common good because they felt society had lost its way. In John 2:15, Jesus comes to the Temple and finds it full of money changers and others desecrating the sacredness of the space. Knowing that the root meaning of the house of worship has been defiled, he pauses, braids a whip, and drives the money changers from the temple. How long he pauses the passage does not say, but Mehter found this first pause to braid very important.

While the family did not know this Mehter group like they’d known the Doves, they decided that their interest in deeper exploration, getting at the root of life, and pausing before activating was a fair trade to eating only nuts.  Once again, this Mehter group was also quite excited about creating names and platforms and so it also changed its name to “Sea Change.” In Matthew 14, Jesus again takes a moment to himself after John the Baptist is killed and he responds to the needs of a great crowd with just a few fishes and some bread.  He sends his disciples out on a boat before him and tells them that he will join them later as he goes off by himself.  As a storm buffets the disciples out on the water, Jesus leaves his meditation to come to them, calms their fears and shows them that they too can walk on water.  Unlike the disciples, Sea Change seemed to be convinced of creating miracles, but this push and pull between “time of reflection” and “time of action” left them unavailable for community. They spoke a great deal of taking time to discern, but were increasingly drawn by external demands on their time and attention.  At this time a great sickness came across the world, and the Sea Change, who were very focused on health, became very focused on this sickness. They were particularly focused on people who were focused on the illness, believing that everyone was focusing too much on the illness.  In this year of great storms and sickness, while frothing up all kinds of ideas and enthusiasm in a great tide of excitement, Sea Change eventually blew away like foam after a winter storm. Perhaps they paused to braid too long or perhaps they were called out to sea to save their followers?

The family was beginning to tire of this.  Would they ever find a home?  Were people who said they wanted to create a home together actually trustworthy?  They couldn’t tell. They were frustrated and didn’t agree about whether the situation was life or death enough to start working well together between themselves. Now a pandemic demonstrated the interconnected but fragile serious nature of the situation, but there was not a clear, single path forward.  The parents fell back onto things that felt most comfortable for them, which unfortunately, because they were very different, were almost opposite things:  one worked very very hard on the house, doing anything she could to make it work and stay financially afloat.  The other kept looking for other opportunities outside the house because he felt his energies at home were often not enough.  They found themselves with a few people around them who had blown in and stayed as the others blew away.

And so the family began again, working on creating a home again with these new people.  In the meantime, their children grew bigger and went back to school, despite the sickness. The home they were making was also a place for guests, and surprisingly so many people were looking to escape the sickness that people kept asking to come stay even as other guests had to change plans.The group that stayed this time, the group that did not have a name, were willing to accept the name of the family’s house as their starting point.  Unlike the Doves or the Mehter, this new group was raw, less sure of its name or platforms but willing to try.

The family was blessed to have learned some lessons by this point about creating their extended family home: first, the experience with the Doves/Hoopoe taught them that it was important to be honest with themselves and what they really wanted. Second, the experience with Mehter/Sea Change taught them the importance of being vulnerable, taking risks based on our best understanding without expecting accolades or complete certainty.  Finally, everything they’d experienced had taught them to be prepared to be mistaken. This is where they began to build a new home, a new community together.  It was an end in some ways, the end of another round of dreams, another year, another strategy, but at the same time another beginning.