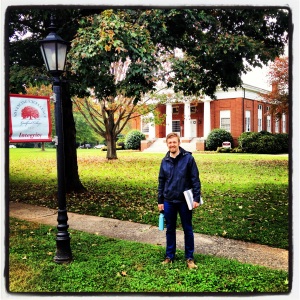 In as many weeks, two events in North Carolina that seem completely unrelated hit me hard.  The first began on Tuesday, February 3rd when this article about Guilford College came through my feed.  What I read both thrilled and disappointed me.  First, I was thrilled to learn that Steven Salaita, a man I know only through his tweets, had been invited to speak at my college.  I particularly appreciate how Steven draws succinct parallels between the history of colonialism in this country and the present reality of colonialism in the Middle East. He does so with poise and poignancy, and it has cost him a job.  Secondly, I was disappointed to hear that his talk had been moved across campus to avoid a building named for a wealthy donor who took offense to his views. The news source is not known for journalistic nuance, but I knew that the story was larger than this one event.

In my last year of college at Guilford, a school known for its peace-loving Quaker heritage, three Palestinians were jumped and viciously attacked on campus by members of the football team.  Tensions had been high everywhere then, with the Iraq War going badly and a color-coded threat system the only thing we had to show for September 11th.  Since August 2006, we’d seen several months of tense altercations and verbal threats by American students directed particularly at two Palestinian students.  Except for some slaps on the wrist, these events received little public administration recognition before the attack in January 2007. I’d worked with one of the Palestinian guys in September to write his version of an earlier altercation where he’d ended up insulted and pushed, and these are his words:

“Before [the attacker] came to us, [we] were discussing what had happened off campus and how a lot of ignorant people call us “Terrorists” and call me “Osama Bin Laden”, just because of my name and where I come from. Calling me a terrorist is an assault on my dignity, my hopes, and everything that I have worked for in order to build peace here in the United States..”

On the night of January 20th, a group of football players attacked the two Palestinian Guilford students and their visiting guest with chains and brass knuckles, hurling anti-Arab, Islamophobic slurs.  We knew at least the visitor was hospitalized with serious injuries but once again, college administration was mum and treated the incident like any other weekend-brawl. My friends were “hardly innocent victims” and the alleged perpetrators, who carried out their attack in the middle of residence hall surrounded by witnesses, deserved “due process.”  I was a member of the Guilford Judicial Board, a body working with the administration to air student grievances in sensitive judicial cases, but the Board was informed we would not hear this case (just as we had not heard any others that year). Students organized forums and vigils. The athletic department, long at odds with the naive Quaker peaceniks on campus, refused to address the issue of violence or Islamophobia on the football team.  While the school issued private judicial decisions in the case (which resulted in both victims and perpetrators leaving campus) the local DA dropped all charges, students graduated and the college moved on.  I mentioned it the college President before his retirement last year and he was as dismissive then as he’d ever been about “the Bryan incident”, as it came to be known.

Guilford appointed a new president this academic year and by all reports she’s a great person.  Since I figured she might be more open to hearing my two cents on the college’s legacy surrounding Islamophobia than her predecessor, I wrote her a letter the day of Steven’s talk telling her about “the incident” and contextualizing her recent decision.  Within just a few days, she sent back a very thoughtful and sensitive response, consistent with the prevailing Quaker attitude, that all campus voices needed to be respected and that she aimed to address the discomforts of both donors and some students by moving the talk.  I responded reiterating my key point was not the feelings of any given student or donor today but rather the legacy of Islamophobia that had never been addressed in the 8 years since a hate crime took place on campus.  On February 6th I wrote:

I witnessed a lack of public administrative response to an unprecedented hate crime exacerbate a (perhaps temporary) climate of fear on campus, but more importantly give a public impression Guilford ignores Islamophobia and the dignity of Palestinian students…I wrote to you after reading once again about the perception my college disrespects Palestinian voices in a nationally-distributed article.

Now, the University of North Carolina is absolutely a different school.  The students in question were Palestinian-Americans, allegedly killed by a neighbor, not another student. (note: in an earlier version of this post I was not aware the students, often referred to as “of Syrian and Jordanian descent” were actually American citizens originally of Palestinian descent via Jordan and Syria.) Rather than never explaining motivations for the violence in 2007, the authorities attempt now to explain the killing of these students by saying the alleged killer is either insane, a lone wolf, or is double parked.  Isn’t that just code for saying there are no lessons to be learned from this tragedy?  I’m not suggesting that we necessarily could stop anyone from killing anyone, but I’ve watched willful ignorance on the part of administrators at a institution of higher learning leave an open wound fester. Tensions are high again now, with the Levant wracked again with violence of our own creation and vitriol as bad as it’s ever been.  Today one can even tweet hate.   Schools could be a place where understanding and restorative justice are modeled, not just marketed.   I watched this lesson missed once, and I fear it will be missed again.

As I sit typing, my wife is studying again beside me for her college classes.  I see her work and I remember just how much a college or university demands of their students.  Being a student of a particular school, even if you have a losing football team, inevitably shapes a student’s identity in addition to giving them an education.  A student doesn’t just spend time in class but also in meetings, talks, eating in the dining hall, with friends, defining one’s identity around an institution every day for years.  Don’t schools then have a mission to care for and protect all their students then?  Perhaps this is just because I went to a religious school, but setting aside the obvious failures of the State in this regard, don’t colleges and universities have an obligation to address not only their student’s comforts and intellectual environment, but also their values? Are these event so very different and how can we stop them from happening again?